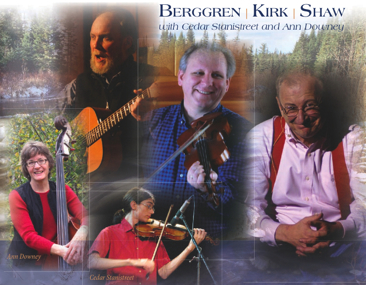 It was quite a day in the North Country for Dan Berggren, John Kirk, Cedar Stanistreet and myself, as we played a “double header” concert at the Tannery Pond Community Center to celebrate the release of our new CD, “North River, North Woods”.  For years we’ve threatened to do a project together, but coordinating the schedules of five touring musicians is like trying to get cats to do water ballet.  As it was we couldn’t coordinate getting Ann Downey to  join us as she had commitments in British Columbia.  Ann, who was kind enough to take time from her busy schedule with the primere Canadian folk group”Finest Kind” to grace the new album with her incredible vocals, will hopefully join us next time! 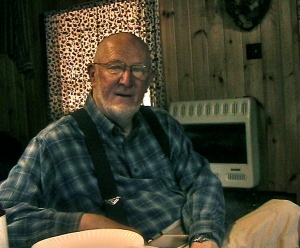 The album was the vision of this man, my good friend Len Kilian.  For better than 20 years Len has counseled me on everything from rushing to judgement, to rushing my backcast!  A dear friend of his, with direct ties to North River and the log driving era, took the financial burden off the project, and we were off and flying.  Little did we suspect this flight would take 3 years, but did I mention the “Cat Water Ballet” scenario before?  In addition to being the catalyst for the recording itself, Len also graced the stage with the reading of a poem by the great Adirondack poet Jeanne Robert Foster, who was also a great personal friend of Len and his wife Mary, who also joined us on that special day. 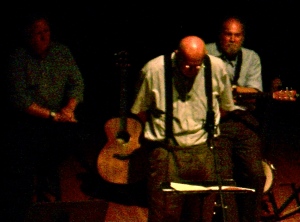 Tannery Pond Community center is located in the center of North Creek village, and is an incredible venue.  A wide variety of art is presented there from almost all disciplines.  Don’t miss the opportunity to visit when you head up that way.

For more information go to: http://www.larac.org/Organ_of_Month/2005/Tannery_Pond_Community_Center.html 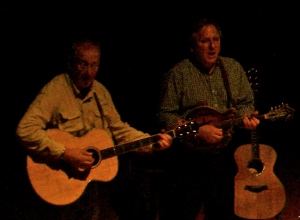 Here you see John and I wailing away at one of our old traditional favorites, “The Ballad of Blue Mountain Lake”.  We got the audience to sing along on the chorus and had a grand old time!  As usual, John played everything but the kitchen sink,…banjos, guitars, mandolins, fiddles,…geesh, isn’t there anything this guy can’t pick??!??!?!

To that end, we had this special instrument handcrafted especially for John.  A bevy of Bavarian clockmakers- turned- luthiers worked for over 10 years to create the masterpiece you see pictured below.  John, we expect you to have The Ride of the Valkyries ready to go for the next concert on this little beauty,… 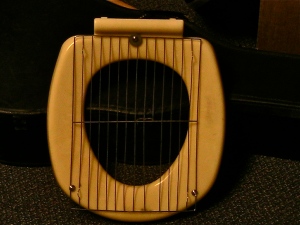 In addition to our wailings and moanings, Dan and Cedar ripped through some smoking Quebecois fiddle tunes and great ballads to really set the tone for the evening. 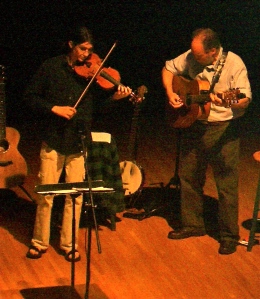 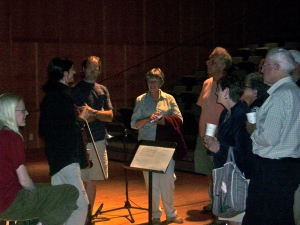 Cedar graduated at the top of his class at the Crane School of Music in Potsdam, NY for violin performance!  He then headed out for Boston where he’s learning to MAKE the violins he, and others will play!  He actually made the violin he performed on at the shows!  John announced he had “dibbs” on the fifth instrument Cedar comes out with and spent a good amount of time playing the one you see Cedar playing here.  Above you see Cedar “holding court” as curious concert goers wanted a better look at is handiwork.  I certainly had no intention of letting Cedar get out of there without playing a tune or two with him myself!  As you can see below, we managed to pull that one off as well! 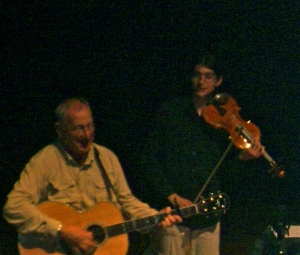 All in all it was a memorable night, good friends sharing good music and more than a couple of laughs!  We’ll be doing it again on August 15 ant the Nakidenna Educational Center in Greenfield Center, NY.  Check the website at http://www.chrisandbridget.com for the information on that, and all the other concerts over the summer!  If this first concert of the summer is any indication, it’s going to be quite a summer!

Adirondack singer, songwriter, and storyteller
View all posts by adkchrisshaw →
This entry was posted in Uncategorized and tagged adirondack, folk music. Bookmark the permalink.